Excerpts from letters to a prisoner 01

[…] Please, let me talk this week about the key stone aspect of the 1st Commandment.
Saints and spiritual masters throughout the two millennia tradition have stated the Love of God as the crucial issue in spiritual life. Truly said, nobody can say he loves God without complying with the Decalogue. Our Lord emphasized this point. However He set the standard very clearly in indicating there were two main Commandments, Love of God and love of neighbour. The rest of the Commandments emerges from these.
Indeed, I am sure there are very chaste people in Hell; or very honest ones; or very nice ones as well, for that purpose. When the Love of God is missing, one may get into a futile checkbox exercise in relation to the Commandments. Virtue is always weak when Love of God is missing. Perhaps because of individual predisposition, or perhaps because God is merciful as well, one can practice this virtue or some other one. If Love of God is not sufficiently present the virtues become kind of hollow. It is, in fact, a very fragile shell that vanishes away as soon as the opportunities to fall into sin arise. There is no other way to root in virtue, to make virtue part of the steady structure of our soul, than loving God.
In order to achieve a solid and consistent Love of God there is no better pathway than the practice of humility. The road (should I say the highway?) towards Love of God is precisely humility. Humility, true humility, is arguably the most profound virtue of all. After all, taking into account that sin came into being on earth through pride, humility is the opposite virtue to the execrable sin of pride which brought Original Sin into the human race. However, practicing humility is one of the most difficult things. I do not remember in which Saint the spirit of pride left the human body about three hours after death. In fact, I think this Saint was pervaded by wishful thinking in saying so and was excessively optimistic. Anyone minimally insightful knows that humility and restraining one’s tongue are the two most difficult to practice.
It is an unfortunate, but common, experience to recognize that even when we practice virtue, other virtues different from humility carry the risk of jeopardizing humility itself. Sometimes, maybe often, we take some pride in telling God something along the following lines: “Oh, God, see I have improved in this or that … I am not like the rest, I do my ‘homework’, and I am moving towards Thee and loving Thee in having advanced in this or that virtue …”. It seems to me this is at the very least pathetic. This puts us in the position of the Pharisee who, having sat in the first row, felt superior and different. As far as I am concerned, I have often fallen into this grievous sin of pharisaic pseudo-prayer.
Our Lord rebuffed the pharisees time and time again. Why is Phariseeism so important to Our Lord? I mean it is because He spent an apparently disproportionate amount of time rebutting them, rebuffing them and discouraging them from pursuing that route. This reminds me very much of Fr Leonardo Castellani, an Argentinean priest and prolific writer who died in 1981. Fr Castellani identified Phariseeism as the most important problem underlying modernism. And I think he was right. But this will be the topic for another one of these letters of mine. Let us just remind ourselves the two moral insurmountable Pharisees’ handicaps were precisely their lack of humility and, therefore, their lack of Love for God. They were too concerned with the 600 plus norms of Jewish religion and priding themselves in fulfilling them.
It took a pharisee leader, Paul of Tarsus, no less, than becoming a prisoner of blindness to realize his own ailment. The rest is widely known and St Paul became by far and large the most profound of all the Apostles. Trick? None, but the practice of humility and rooting everything in God. He had a complete disdain for himself (noticeable through his letters) which still strikes me 2000 years afterwards. He was all for Christ. As it should be.
I do apologize if I am entering into painful grounds, but I think that perhaps your imprisonment is your blindness. Being imprisoned is such a humiliation in itself that it puts you immediately on the track of that highway of humility I mentioned above. Take advantage of this to promote the Love of God. Make a recall of your past and present sins and consider an innocent Man, Our Saviour, who suffered the most painful and indecent possible death only to save you. Without Him your fate would be grim. Aren’t you then obliged, as we all are, to love Him more than anybody else? Aren’t you then obliged to do every single action, even the most minute, to think every thought, even to feel any emotion, because of love for Him? He bought your own life, not just this one, but more importantly the eternal and definitive one, at the price of His own Death. The day you recover your freedom you will think you will have achieved something really important. Humanly speaking I agree. Yet that physical freedom will be just a pale reflection from freedom from sin. St Paul needed his own way to Damascus to achieve it. Maybe, something for you to ponder, you needed your way to [the prison] to achieve yours. [You] will be a deeper, more humble, therefore more God-loving, person after this devastating experience. Maybe this imprisonment of yours has given a big kick in the arse of your lukewarmness. The power of God is better manifested in His capacity of extracting enormous good from, in this case, unjust experiences, such as you being imprisoned when the closest ones to you know it is completely unjust.
[…]
Sincerely in Christ the King and Mary Queen, 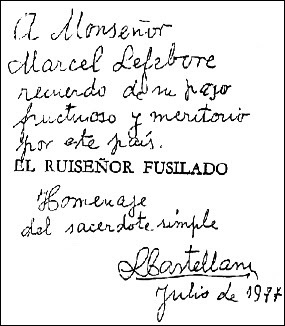