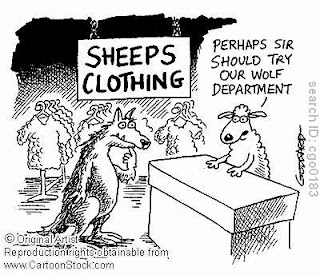 It is sad enough when people lose their faith and leave the Church; but it is much worse when those who in reality have lost their faith remain within the Church and try - like termites - to undermine Christian faith with their claim that they are giving to Christian revelation the interpretation that suits “modern man”.

I wish to conclude (…) with an appeal to all those whose faith is not corroded to beware of these false prophets who want to extradite Christ to the secular city in a way analogous to Judas’ betrayal of Jesus into the hands of His prosecutors.

Let us recall the marks of these false prophets. He is a false prophet who denies original sin and mankind’s need of redemption and thereby undermines the meaning of Christ’s death on the Cross. He is not a true Christian who no longer sees that redemption of the world through Christ is the source of true happiness and that nothing can be compared to this one glorious fact.

He is a false prophet who no longer accepts the absolute primacy of the first commandment of Christ - to love God above all things - and who claims that our love of God can manifest itself exclusively in our love of neighbor. He is a false prophet who no longer understands that to long for the I-Thou union with Christ and for transformation in Christ is the very meaning of our life. He is a false prophet who claims that morality reveals itself not primarily in man’s relationship with God, but in those things that concern human welfare. And he has fallen prey to the teaching of false prophets who only sees in the wrong done our neighbor our injury to him and remains blind to the offense against God that this wrong implies.

He who no longer sees the radical difference that exists between charity and humanitarian benevolence has become deaf to the message of Christ.

He who is more impressed and thrilled by “cosmic processes”, “evolution”, and the speculations of science than by the reflection of Christ’s Sacred Humanity in a saint and by the victory over the world that the very existence of a saint embodies, is no longer filled with the Christian spirit. He who cares more for the earthly welfare of humanity than for its sanctification has lost the Christian view of the universe.

Beware of false prophets who ignore the repeated warnings of our Holy Father (…), as well as the Holy See’s clear formulation of the various heresies and misconceptions pervading the world today. Beware of those who try to drown the voice of the Vicar of Christ in noisy propaganda.

Nevertheless (…), if my heart bleeds from seeing the ravages done in the vineyard of the Lord and from seeing the defilement of the sanctuary of the Church, I am yet full of hope, because our Lord has said: “The gates of Hell shall not prevail against it”.

Without a trace of optimism, but full of hope and love for the Holy Church, for the Mystical Body of Christ, for the City of God, and in spirit of deep devotion and obedience to our Holy Father (…), let me conclude with the words of [the] credo: I believe in one, holy, catholic and apostolic Church.
Publicada por Miles à(s) terça-feira, março 22, 2011